Last fall, fewer than 17 percent of Quincy’s registered voters went to the polls in a municipal election that included contested City Council and School Committee races. A new group formed following the election hopes to change that.

Liz Speakman, who ran for School Committee last year, and Maggie McKee, a volunteer on Speakman’s and other campaigns, formed the group Quincy Votes! following the November 2021 election in which 16.9 percent of registered voters cast ballots. The group, which is non-partisan and will not be endorsing candidates in future campaigns, was established to help increase engagement and turnout in future elections.

“I was just kind of heartsick when I saw how few people were voting in this municipal election,” McKee recalled in a recent interview. “I was trying to post on social media – Facebook and stuff – to be like, ‘OK, this is today, this is voting day, this is preliminary day,’ and a lot of people didn’t know about it and to find out fewer than 17 percent of people turned out – I was watching the results come in and I was like ‘no!’

“Whoever they vote for, we both just want people to be more engaged in the process and following local news and stuff.”

“I moved here in 2009 and for the first few years really didn’t know anything about Quincy, didn’t really follow local politics. I was just sort of commuting to work,” McKee continued.

“Thanks to The Quincy Sun and other groups that I’ve gotten involved with, I’m starting to understand more about the city, and I think we just felt like this was really needed – some way of engaging more people in the process of voting and just paying attention, and also just community building.”

While she was on the campaign trail last year, Speakman said she learned many residents aren’t tuned into what is happening locally.

“When I was running for School Committee, similar to Maggie I learned how many people just didn’t know what was happening locally whether it was Cleaner, Greener cleanup days or the City Council meetings that were happening that people could watch virtually. I think a lot of parents got more involved in School Committee and watching those meetings when COVID hit and paying attention to decisions that we’re being made,” Speakman said.

“I don’t think it’s just Quincy that a lot people just feel like their vote doesn’t matter, their voice doesn’t matter, politics is useless to get involved in,” Speakman added. “[We’re] really wanting to shift that narrative and have people feel like it does matter when you write a letter to the editor or you write a letter for open forum to a meeting or you run a campaign.”

When asked why people might not vote in a local election, based on her experience last year, Speakman said even some regular voters were unfamiliar with the School Committee, its members, and who was running in the election, while other residents felt their vote did not matter.

“When we were out sign holding…and out at community events talking to a lot of people who don’t vote, they really felt like they either didn’t know enough to make an informed decision about voting or they really felt like it didn’t matter – that there is power that exists in the city, and again, I don’t think it is unique to Quincy, but there is power that exists in Quincy and there is no way to change that, so they sort of disconnect and disengage,” Speakman continued.

“We were really trying to, with my campaign and then with this group, show people that it does matter. There are a lot of people that I talk to who are much more engaged on the state level or national level who feel strongly about big issues that are happening nationally – the presidential election or the governor’s race – and those are the people I really tried to engage locally and say you’re doing all this stuff on a bigger level, this is amazing, we need you here in Quincy too. We need your voice in Quincy, we need your expertise, your skills, your interests, your knowledge in Quincy.”

Following the election, Speakman said she posted on the Facebook page for Quincy For Transformative Change, asking if anyone would like to get together to talk about ways to boost voter turnout and engagement. About 50 people came to a meeting in early December at the Wollaston Congregational Church, the first meeting of Quincy Votes!

The voter education and engagement working group, for example, is compiling information explaining what the City Council and School Committee do. The working group is also reaching out to underrepresented communities and explaining how residents can register to vote in future elections.

Quincy Votes! has grown since December and there are now 110 members signed up for its email list, McKee said.

“We’re still growing, but having been involved in a couple of other environmental groups, I’m really impressed about how passionate people are, really excited to work on these things,” she said.

“Between meetings people are working in the working groups and then give us updates at the bigger meetings,” Speakman added. “I’m so impressed with the amount of work all these volunteers are wanting to do. I feel like there has been this energy and excitement to do something and there just needed to be a structure around it.”

Speakman said that while she and McKee cofounded the group, it has been a team effort.

“We’re not leading it. We’re behind the scenes saying what do you need from us,” Speakman said. “One of our members put together a Discord server so we could all communicate. Another member put together a calendar that has all the city meetings and community meetings that are happening in the next several months so people can access that.

“We are basically saying what do you need from us from a technical standpoint or resources or whatever to help you actualize the ideas that you have. So much of the activism I’ve seen in Quincy has been on Facebook and I feel like it didn’t translate in the election. There is a lot of active people on Facebook that aren’t necessarily voting so my hope, and I’ve been saying this at every meeting, is we need to not just be on Facebook. Certainly some being on Facebook is helpful to get information out, but we need to be in the community talking to people where they are at.”

Quincy Votes! has been meeting on the first Saturday of each month and will meet virtually this Saturday, March 5. McKee said residents looking to join Quincy Votes! can email quincyvotes@gmail.com for more information.

In future elections, McKee said Quincy Votes! plans to put together voter guides, explaining candidates’ positions on particular issues; she had done something similar ahead of last year’s School Committee race, posting them on social media.

The group could also potentially host a candidates night in the future as well, Speakman added.

One thing Quincy Votes! will not do is endorse is candidates.

“We’re not going to endorse candidates,” Speakman said, adding that she would step aside from the organization should she run for office again.

“This group is purely civic engagement, getting people aware of what’s happening in the city, how they can get involved. If they find a candidate that they love, we want them to feel like they know how to help whoever that candidate is, how to get involved, but we are not going to say, ‘you know who you need to support is this person.’ That is not our goal.

“Personally, yes, I am going to support different people and I am going to volunteer and do different things, but that is not the role of Quincy Votes! But we want people to feel like they do know how to plug in if they do decide there is a candidate or campaign or ballot question or something they are excited about.” 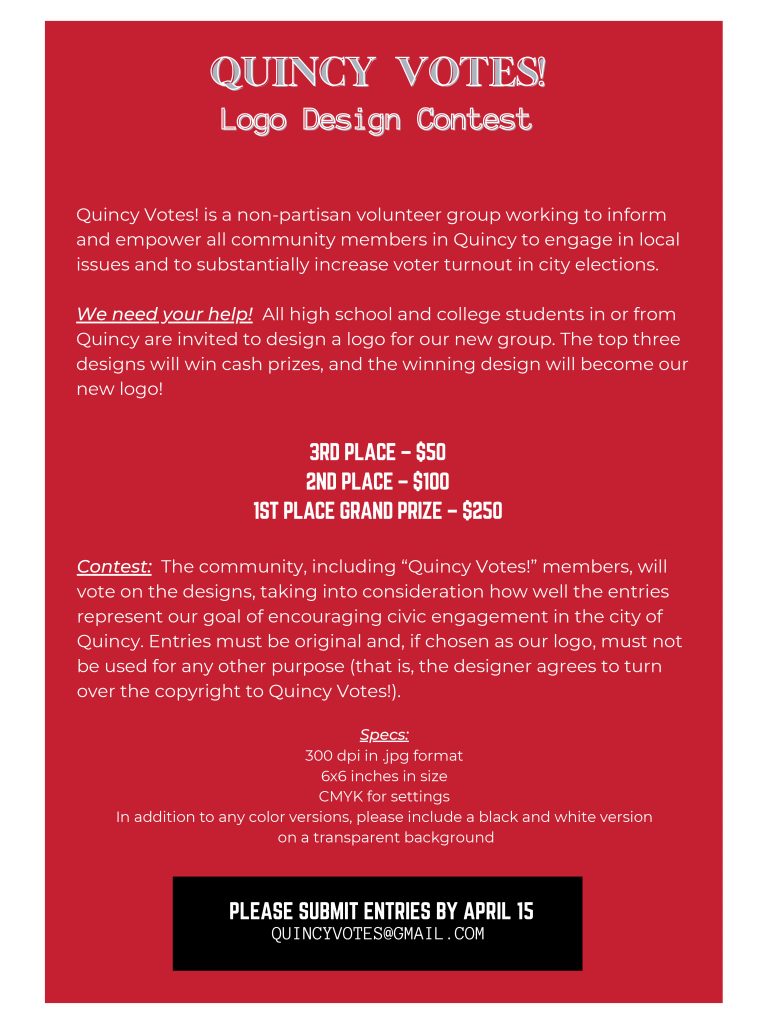 All high school and colleges students in or from Quincy are invited to design a logo for the new group. The top three designs will win cash prizes, and the winning design will become the group’s new log.

The community, including Quincy Votes! members, will vote on the designs, taking into consideration how well the entries represent the group’s goal of encouraging civic engagement in the city of Quincy.

Entries must be original and, if chosen as the logo, must not be used for any other purpose (that is, the designer agrees to turn over the copyright to Quincy Votes!).

Specifications: 300 dpi in .jpg format, 6 x 6 inches in size, CYMK for settings. In additon to any color versions, those submitting entries should include a black and white version on a transparent background.

Entries must be submitted by April 15. Email entries to quincyvotes@gmail.com.