BBB recommends the sites below to assist with finding resources to make your home more cyber secure.

Family and media
Control With Cable is an initiative of the cable industry to educate parents about online safety and the appropriate use of the Internet by their children. Control With Cable’s “Control, Education, Choice” guidebook teaches parents how to keep their family safe on the Web.

Entertainment software rating board
The Entertainment Software Rating Board (ESRB) is a nonprofit, self-regulatory body that assigns age and content ratings for video games and mobile apps so parents can make informed choices. As part of its self-regulatory role for the video game industry, the ESRB also enforces industry-adopted advertising guidelines and helps ensure responsible online privacy practices under its Privacy Online program. ESRB has online privacy and security resources for parents, including a family discussion guide, and tips on setting parental controls.

GetNetWise
This site is a resource for families to learn how to protect themselves from online danger and create the safest online experience possible. The glossary and kid sites are a resource for parents teaching their children about the Internet.

Internet keep safe (iKeepSafe) coalition
The iKeepSafe Coalition is a partnership of governors and/or first spouses, attorneys general, public health and educational professionals, law enforcement officials, and industry leaders working together for the health and safety of youth online.

Net Cetera (Online Safety Guide for Parents)
Net Cetera is an FTC-developed guide that advises parents on discussing online safety with children of all ages. Topics include online socialization and communication, mobile phones, protecting your computer from malware and setting up parental controls.

June F. Piccarini (Hennessey) of Quincy formerly of Boston passed away on Jan. 21st, 2023. Wife of the late Joseph L. Piccarini.  Loving mother of Donna Piccarini of Quincy and the late Joseph D, Dominic E. and June F Piccarini. Sister of Jacqueline Gentile of Quincy and the late Matthew E. Hennessey, Edna Griffin and May I. (Irene) Shannon.  June was the amazing Grandmother of 6 grandchildren and 5 great grandchildren. Also survived by many nieces and nephews.

June retired from the City of Quincy after working many years at Quincy City Hospital. She was a member of the Elks Club #943.  June enjoyed traveling, casinos, arts and crafts, watching the animal channel, dancing to disco but most of all she loved being around her family and friends.

Relatives and friends are respectfully invited to attend Visiting hours on Wednesday, Feb. 1, 2023 from 4-7 p.m. at Hamel-Lydon Chapel, 650 Hancock St., Quincy and the Mass of Christian Burial on Thursday, Feb. 2, 2023 at 10 a.m. at St. John the Baptist Church, 44 School St., Quincy. Interment will follow at Blue Hill Cemetery in Braintree. Funeral arrangements are under the care of Hamel-Lydon Chapel.  For information and online condolences, please visit Hamellydon.com

Barbara M. (Longhi) Robinson, age 89, of Abington, formerly of Braintree and Quincy, died peacefully, Tuesday, January 24, 2023 in the comfort of her home, surrounded by her loving family.

Barbara was born in Quincy, to the late Nicholas M. and Josephine T. (DiCesare) Longhi. Raised and educated in Quincy, she was a graduate of Quincy High School, Class of 1950.

She lived in Abington for the past sixteen years, previously in Braintree for forty years, and earlier in Quincy.

Barbara was employed as a branch administrator for MetLife for forty years and had been retired for many years.

Barbara enjoyed shopping with friends. Most of all, she was devoted to her family, especially her daughters and grandsons. She loved attending their many games and activities, and encouraging them in their endeavors.

For those who wish, donations in Barbara’s memory may be made to the Alzheimer’s Association, 309 Waverley Oaks Road, Waltham, MA 02452.

The body of an adult female found the afternoon of Jan. 18 near the Town River not far from Washington Court has been identified as Laura Bolan, age 55, the Norfolk County District Attorney’s office said Tuesday.

Her body was discovered around 1:10 p.m. on some coastal rocks near a pier on the Town River Jan. 18.

“There are no indications at the scene of trauma or foul play,” Traub said. 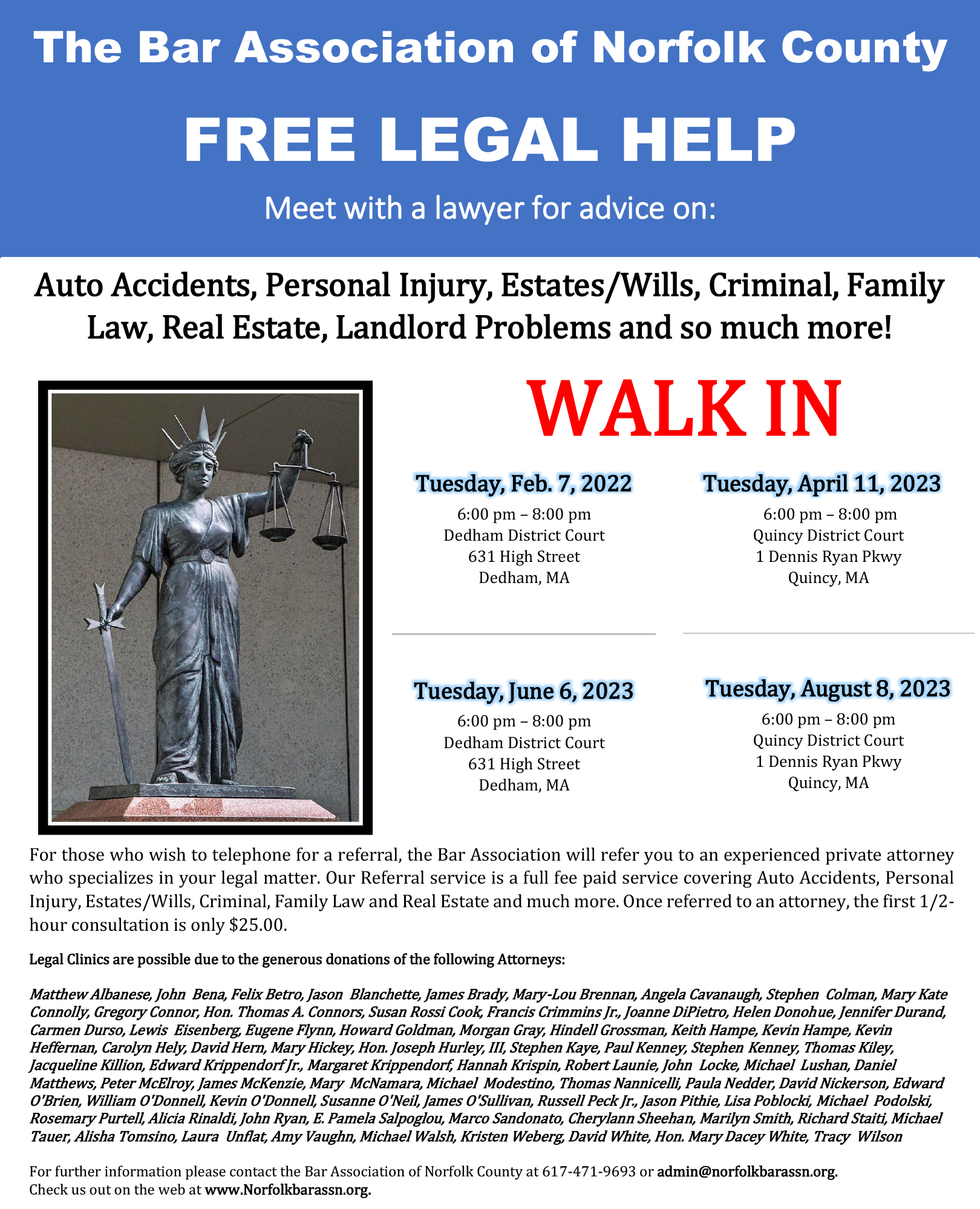 One of the seven men charged with murder in connection with the August shooting of a Quincy man in his apartment building’s parking area was held without bail following his arraignment Monday.

The defendant, Dante Clarke, age 23, of Brockton was taken into custody at a Wareham hotel, according to David Traub, a spokesperson for Norfolk District Attorney Michael Morrissey. Clarke was arraigned for murder and related charges in Norfolk County Superior Court on Monday and pleaded not guilty. He was held without bail and is due back in court on March 6 for a pre-trial conference.

Clarke is one of seven men who were indicted for murder in December in connection with the Aug. 18 fatal shooting of Jordan Wiggins in the parking area of Wiggins’ residence within the Elevation apartment complex at Crown Colony. Clarke was indicted on a number of charges, including murder, armed home invasion, and two counts each of kidnapping with intent to extort and armed assault with intent to rob.

Clarke was arrested in September for assault and battery on a police officer involved in the homicide investigation, before he was identified as a suspect in the shooting, Traub said previously. Clarke was arraigned on that charge on Sept. 12 and pled not guilty. He failed to appear for a pre-trial conference the following month and a default warrant was issued at that time.

Bell was arrested in December in Houston and was arraigned in Norfolk Superior Court on Dec. 23. He pleaded not guilty at the time and was ordered held without bail.

Ramos was arrested in New York and was also arraigned in Superior Court on Jan. 13. He pleaded not guilty and was held without bail.

Bell, Harper and Ramos are all due back in court for a pre-trial conference on March 6.

Francis C. “Frank” Perfetuo, age 81, a longtime resident of Quincy, died peacefully, early Sunday morning, January 22, 2023 following a long illness, after spending the day prior with his four children and youngest grandchild at his side.

Frank was born in Quincy, to the late Salvatore and Rosalie C. (Morreale) Perfetuo. Raised and educated there, he was a graduate of Quincy High School, Class of 1959. He attended Northeastern University in Boston.

Frank was proud to have served in the U.S. Army Reserve.

He was employed as a letter carrier for the United States Postal Service for forty-one years, primarily in Quincy, and later in Boston’s Financial District, where he often met his son and youngest daughter for lunch. He had been retired for many years.

Frank served as a steward for the American Postal Workers Union. He was a former member of the Braintree Moose Lodge.

Frank was an avid sportsman, as a quarterback in high school, and later in golf, bowling and pool, where he organized and won many tournaments across New England. He especially enjoyed watching football and supporting the New England Patriots. He was once quoted, “I will watch anything with a ball.” He was a lifelong Quincy High Presidents supporter, and loved to attend the Thanksgiving football game every year. He enjoyed frequenting local Quincy restaurants including McKay’s, Grumpy White’s and Cagney’s as well as Maria’s in Braintree. He enjoyed visits with his children, and loved to tell jokes and making others laugh. People often commented on his wonderful sense of humor. He also loved to dance, and was very proud of his Italian heritage.

Devoted father of Shane A. Kyller and his wife Julie Mila of Quincy, Dawn M. Leonard of Quincy and her late husband William, Jenny C. Ade and her husband Otto of Ill., and Kyla R. Desmarais and her husband Kevin of Atlanta, Ga.

Dear brother of Jerry Perfetuo and his wife Marjorie of Hanover.

Frank is also survived by his nephew, Stephen Perfetuo, his niece, Lisa Miller, and many cousins.

Former husband of Sally A. Kyller.

Visiting hours will be held at the Sweeney Brothers Home for Funerals, 1 Independence Avenue, Quincy, on Friday, January 27, from 4 – 7 p.m. Relatives and friends are invited to attend. Funeral Services will be conducted at the funeral home on Saturday, January 28, at 10 a.m. Interment, with military honors, to follow at Pine Hill Cemetery, West Quincy.

Janice M. (Little) Philie, age 77, of Rockland, departed this life on Friday, January 20, 2023 surrounded in love by her family.

Loving grandmother of Tyler, Eliot and Margret and Dominic and Samuel.

Beloved wife for fifty-five years of the late Edward Eugene Philie, who died on March 31, 2022.

Jan was also predeceased by her sisters, Barbara A. Little and Joan S. Peterson, and her brother, Thomas Banks.

Janice is also survived by her cousins, the DeCoste and Frazier families.

Janice graduated from the former Saint Joseph’s School in Quincy and Cardinal Cushing High School in South Boston, Class of 1963. After graduation she attended Quincy City Hospital School of Nursing graduating in 1966 and began a lifelong career in nursing. From Pediatrics to Geriatrics, Jan worked at Quincy City Hospital, South Shore Hospital, and then found her true passion at South Shore Rehabilitation and Skilled Nursing Facility in Rockland working with the elderly.

Jan was always lending a hand to those in need, an extremely sweet lady who loved to sew, read, knit, do puzzles and listen to her favorite Irish music.

Visiting hours will be held at the Sweeney Brothers Home for Funerals, 1 Independence Avenue, Quincy, on Wednesday, January 25, from 4 – 7 p.m. Relatives and friends are invited to attend. A Funeral Mass will be celebrated in Saint John the Baptist Church, 44 School Street, Quincy, on Thursday, January 26, at 10 a.m. Interment to follow at the Massachusetts National Cemetery, Bourne.

In lieu of flowers and due to floral restrictions at the cemetery, donations in Janice’s memory may be made to St. Jude Children’s Research Hospital, 501 St. Jude Place, Memphis, TN 38105 or a charity of your choosing.