Skip to content
Boston’s Run to Remember in cooperation with Dorchester’s Erie Pub will be registering and providing Bib pick-up at the Erie Pub on Saturday, May 21st from 3 to 6 p.m.
Boston’s Run to Remember is hosted by the Boston Police Running Club as a tribute to Fallen First Responders.  The Race will be held Sunday May 29th starting at 7 a.m. on Seaport Blvd.  There will be two runs a 5 mile  and half marathon both starting at 7 a.m.
Interested runners and walkers may signup online at http://www.bostonsruntoremember.org or at the Erie Pub on Saturday May 21 beginning at 3 p.m.  Coming back after a two year COVID hiatus race organizers are planning on five thousand entries in the combined races.
All proceeds from Boston’s Run to Remember are given to charity.  Historically the event has had large participation from Quincy and the South Shore.  Local Police and Fire departments have participated in the first responders challenge divisions each year.
Race Organizers  would like to thank the Stenson family and the Erie Pub staff for being part of this great Boston tradition.

Morrisette Legion Baseball will be holding tryouts for both Junior and Senior Legion teams May 14-15, May 21-22 and May 28-29.

The tryouts start at noon and will be held at Bishop Field. This is for kids ages 13-19.

Any questions reach out head coach Steve Maze at Morrisetteball@aol.com.

Shown below is a sequence of photos by Quincy Sun photographer Bob Bosworth showing North Quincy’s Orlagh Gormley scoring a layup to set a new city record of 56 points in one basketball game. Orlagh’s 56 points broke the record of 54 scored by North Quincy’s Brian Ross in 1998.

Orlagh’s record came during the Red Raiders’ Div. 2 tournament win over Masconomet at NQHS March 5. Her record game was one for the ages as she played only a little more than 26 minutes (high school basketball games are 32 minutes – 8 minutes per quarter). She scored 22 points in the first half and had 39 at half time.

In the game against Masconomet, Gormley made 23 field goals from 40 attempts, was 3 for 8 in three-pointers and made 7 out of 10 free throws. She also had 10 rebounds, 9 steals, 8 deflections and 4 assists. Gormley is nearing the 1,000 point plateau for her high school career. She finished the season with 963 career points – 37 points shy of the 1,000 mark. She has amassed the 963 points in 38 high school games (25 this year and 13 during her freshman season). This past season Orlagh scored 698 points averaging 27.9 points per game.

Here is a look at Orlagh’s drive to the basket when she scored her record 56th point. 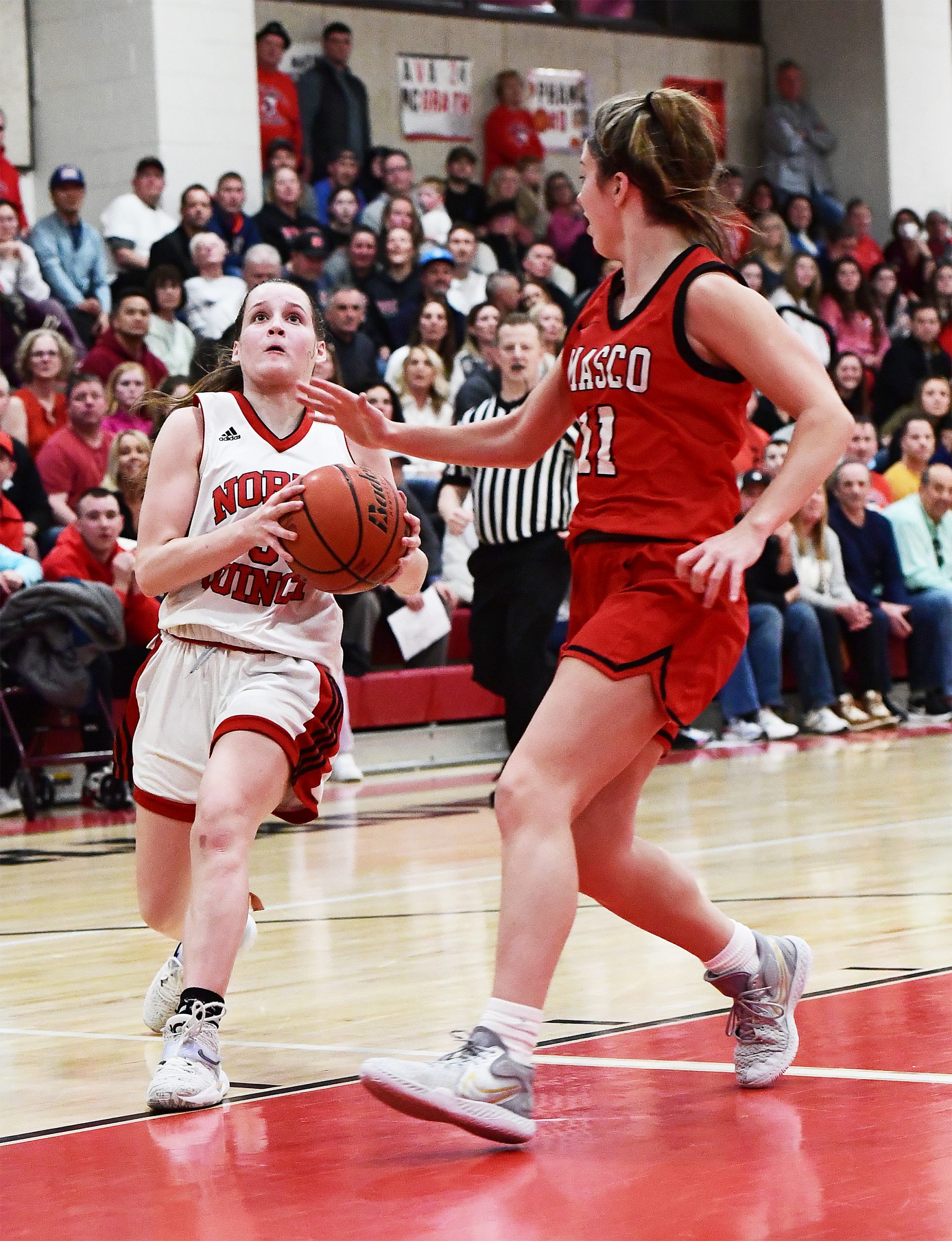 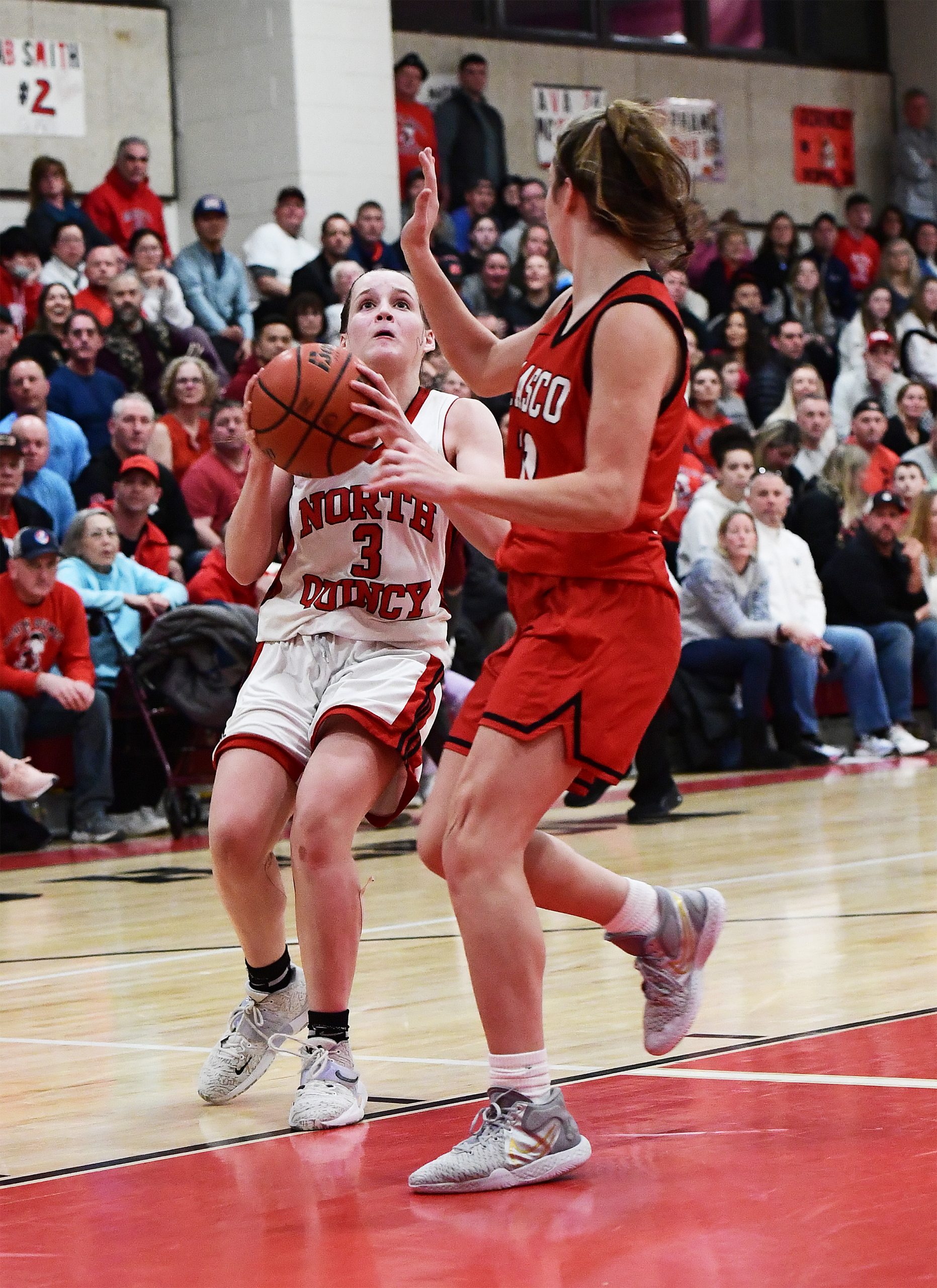 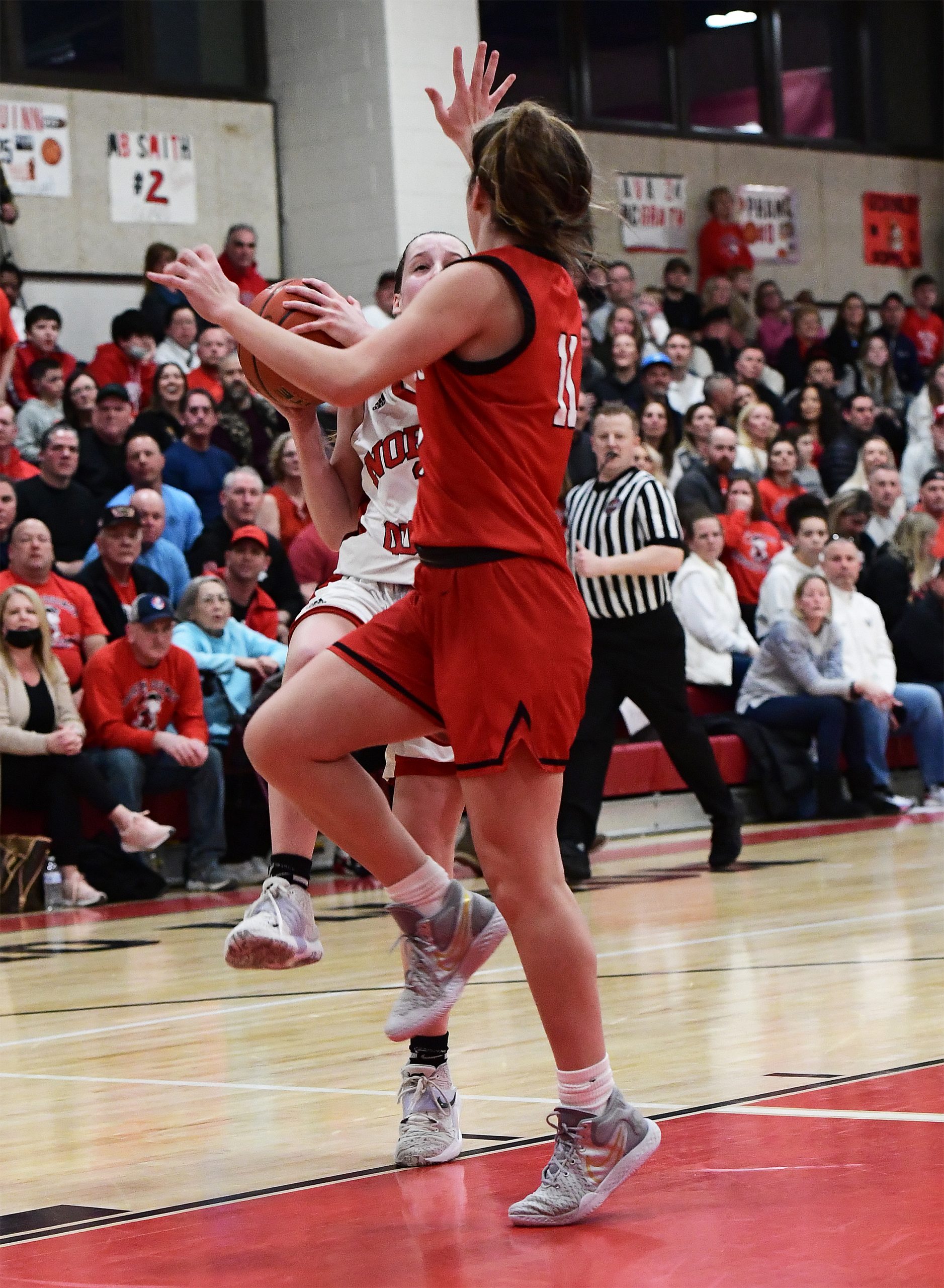 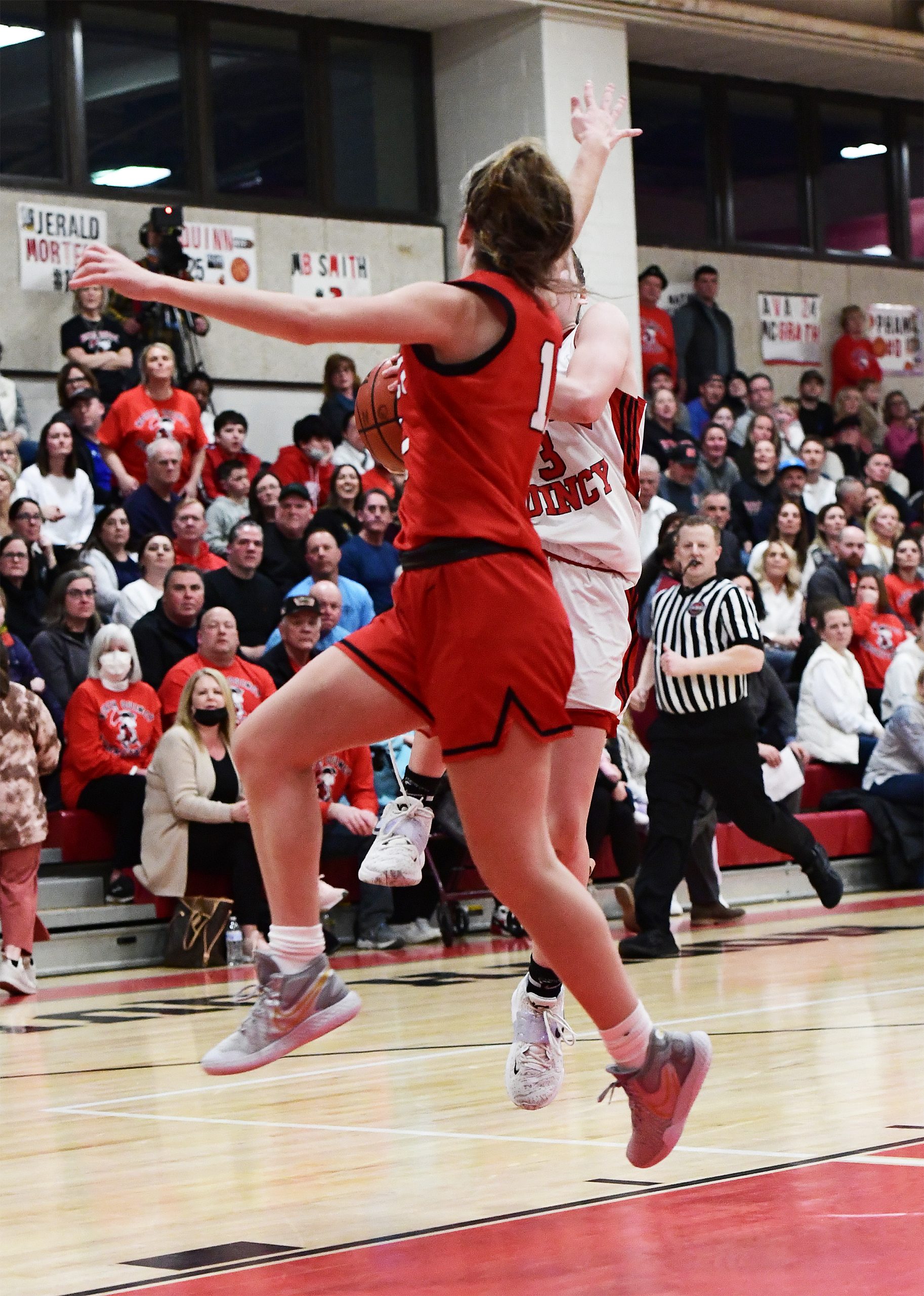 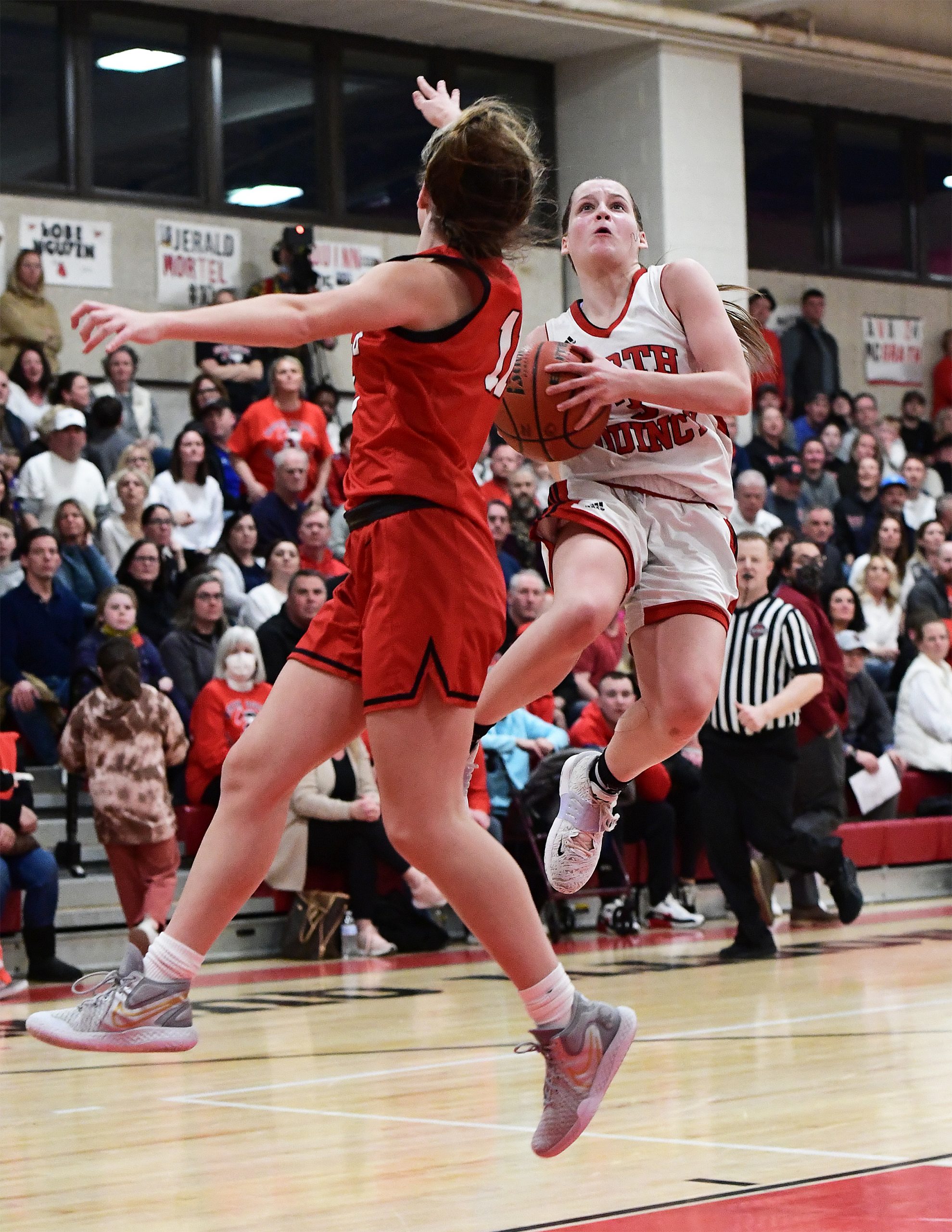 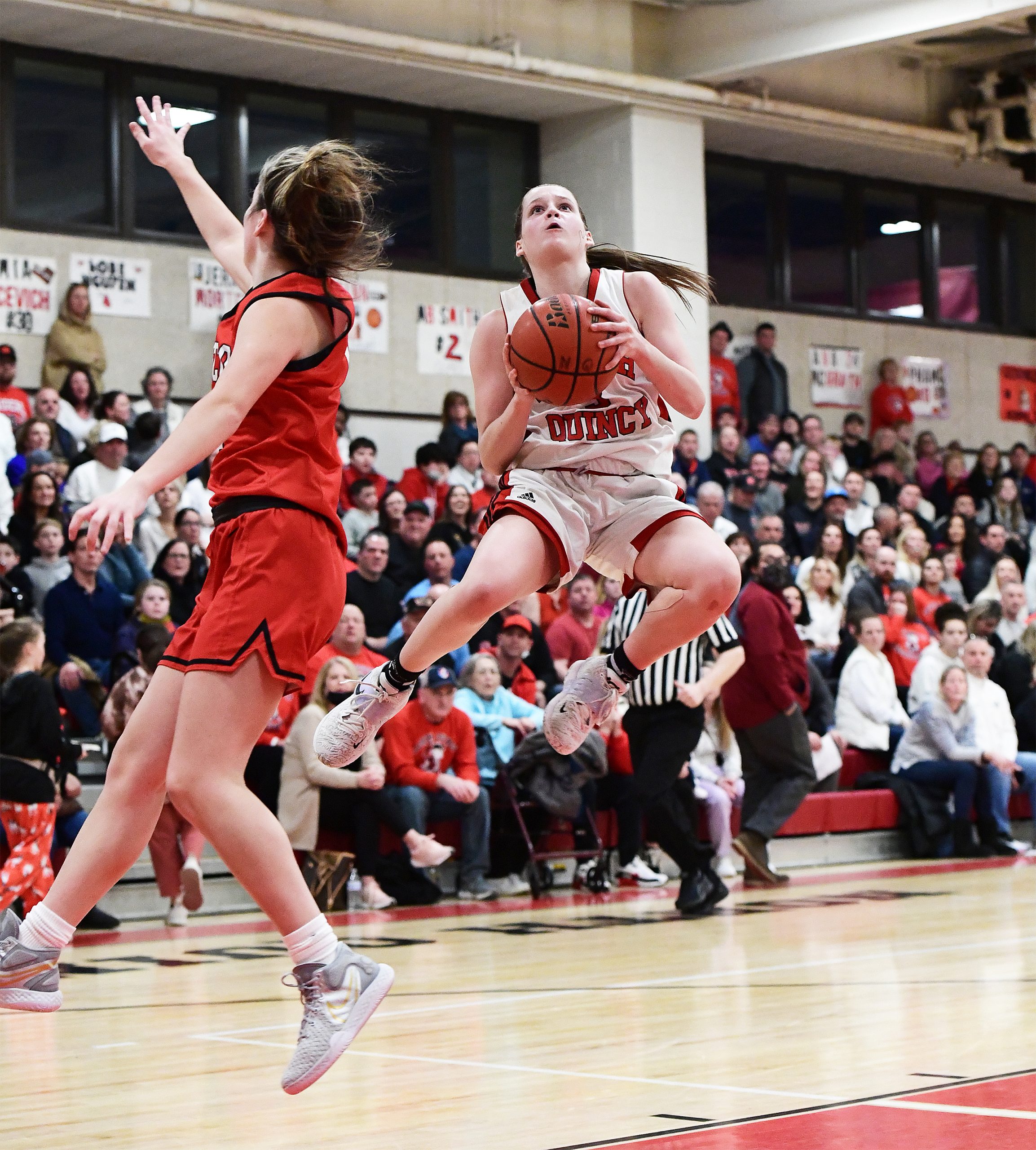 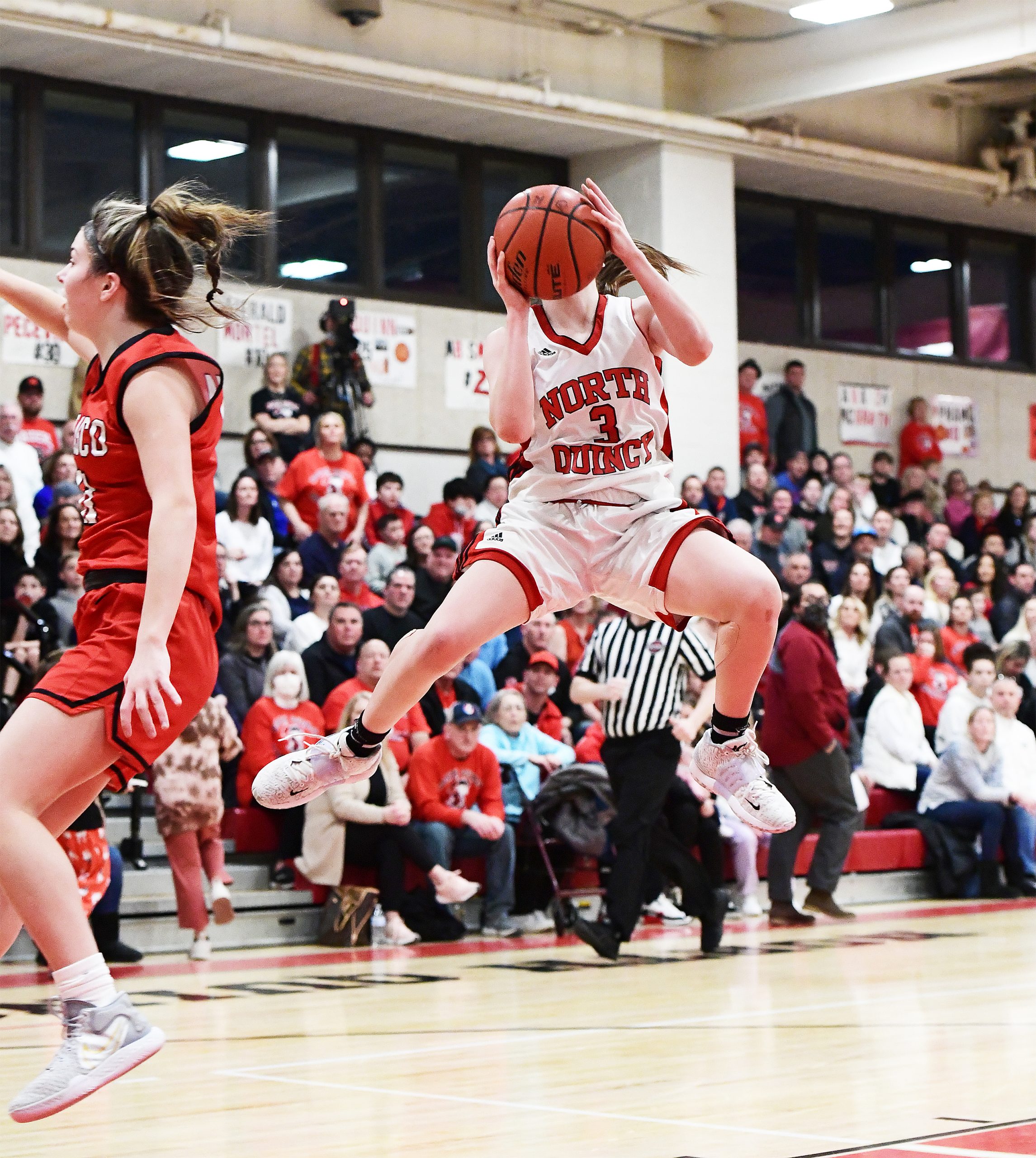 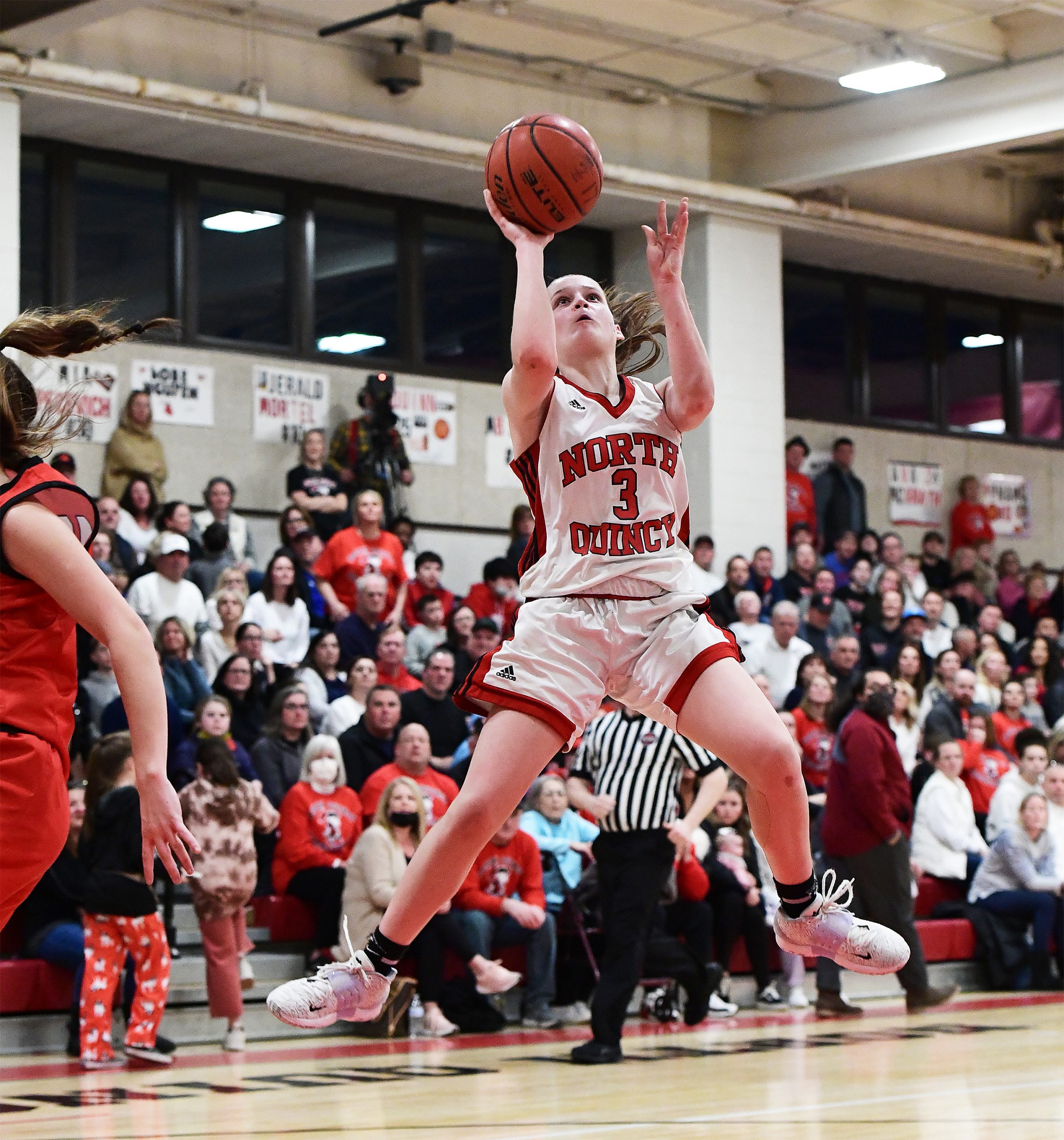 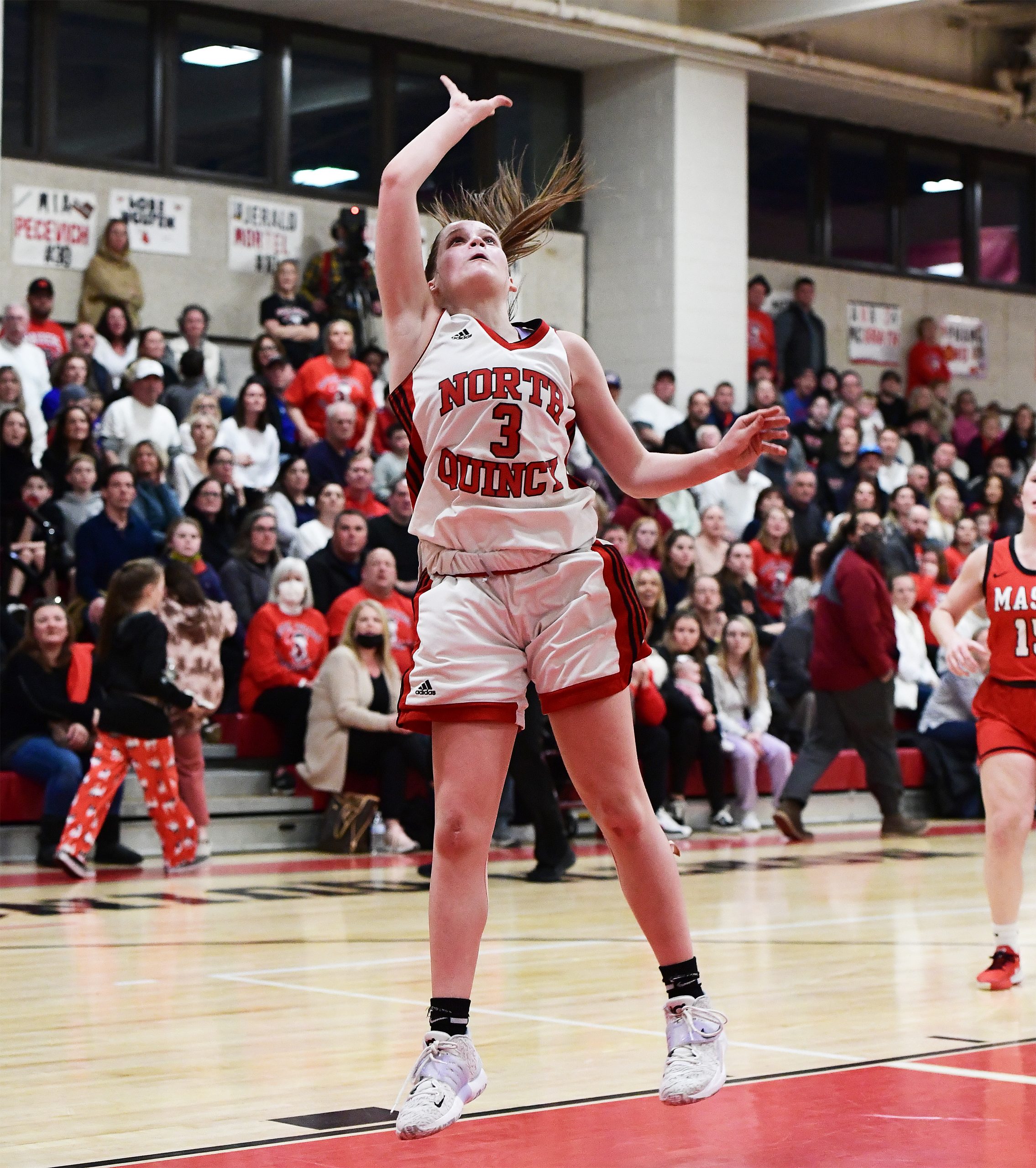 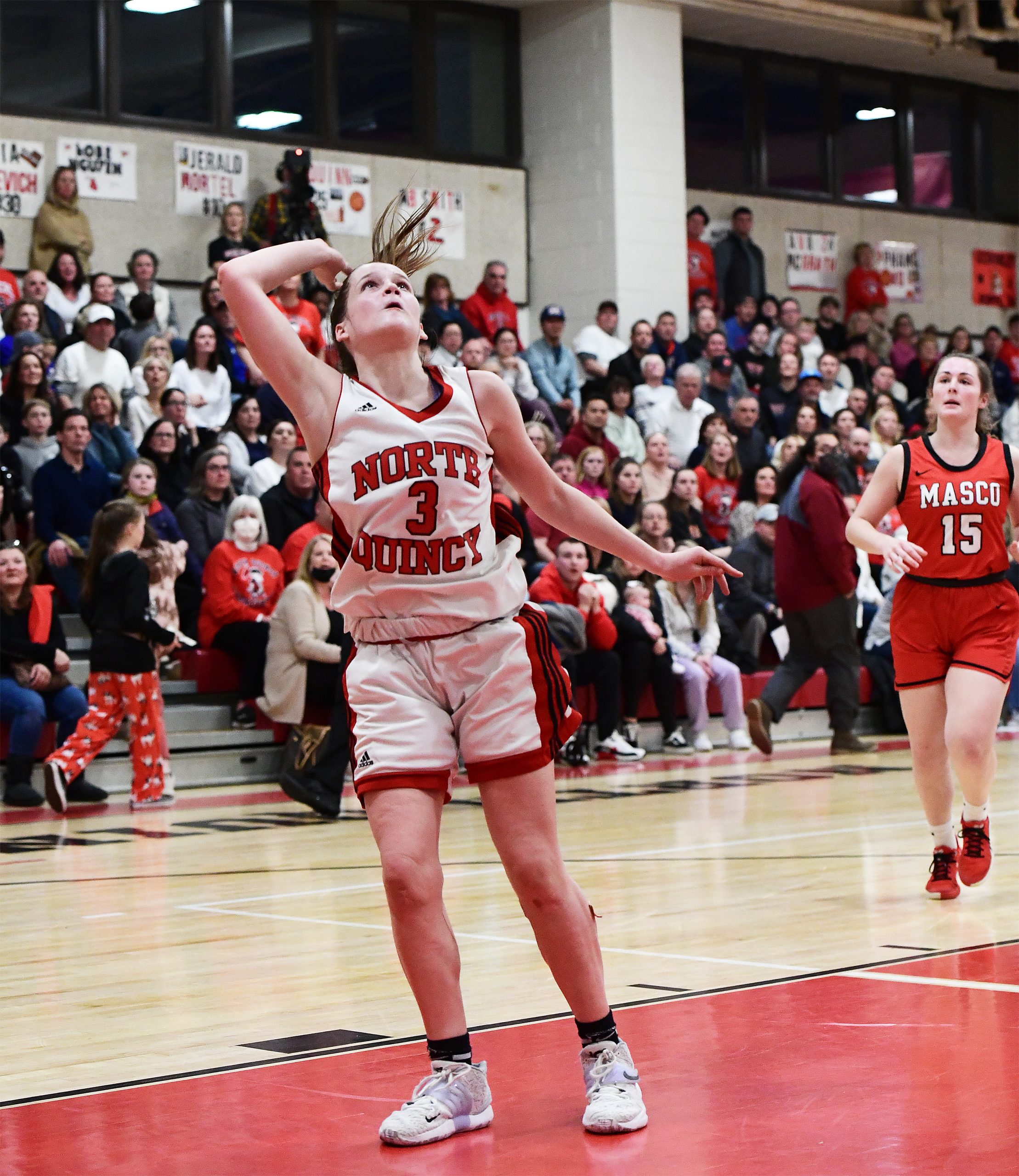