Three Boston-area watershed organizations, along with U.S. Environmental Protection Agency (EPA), on July 15th announced the 2021 Water Quality Report Cards Grades for the three rivers that flow into Boston Harbor: the Neponset, the Charles, and the Mystic.

“This year, as we mark the 50th Anniversary of the Clean Water Act, EPA celebrates the excellent collaboration between all levels of government and our important partners – these watershed associations, as well as an informed and engaged public – all working together to achieve cleaner water and a healthier environment,” said EPA New England Regional Administrator David W. Cash.

The 2021 Report Card Grades, which range from A to F,  show vast improvement compared to decades before, yet present new challenges in ensuring our rivers are clean, healthy, and safe for all.

“Today’s reporting of water quality in the major urban rivers of Boston and surrounding communities underscores the hard work that has contributed to healthier waters, while also spotlighting locations and types of pollution that still need to be addressed. All of our citizens deserve to enjoy a clean and healthy environment, especially in historically underserved communities,” said EPA New England Regional Administrator David W. Cash.

This year marks the 50th anniversary of the Clean Water Act, the 1972 landmark legislation that called for all waterways in America to be “fishable and swimmable” by 1983, and the elimination of all discharges of pollutants into navigable waters by 1985.

While those ambitious goals are yet to be achieved, the Clean Water Act has been a game-changer for the Neponset, Charles, and Mystic Rivers. Before its passage, the three rivers that flow into Boston Harbor were industrial dumping grounds, awash with raw sewage and toxic pollutants, inhospitable to plant and animal life. By setting a broad vision for restored waterways and providing a regulatory framework to achieve it, the Clean Water Act provided the necessary leverage to hold polluters accountable and ensure clean, fishable, swimmable rivers for current and future generations. The Clean Water Act’s power, coupled with decades of relentless, loving vigilance and advocacy from the three watershed associations, has transformed our rivers again into beautiful, living waterways.

“For fifty years, the Clean Water Act has stemmed the tide of pollution and improved water quality for communities across Massachusetts,” says U.S. Senator Ed Markey. “The tremendous work of the Charles River, Mystic River, and Neponset River Watershed Associations is a testament to the vital partnership between federal, state, and local leaders in our mission to guarantee clean water, mitigate environmental injustice, and safeguard against climate change. Every community deserves access to clean, safe waterways. I am proud to support the Clean Water Act and all our partners who will ensure that Boston Harbor will thrive in the decades to come.”

“MWRA’s ratepayers have invested close to $1 billion for water quality improvements in the Charles, Mystic, and Neponset, and the results have been remarkable,” said Fred Laskey, MWRA’s Executive Director. “Thanks to the strong support of our federal, state, and local elected officials, sewer overflows have been reduced by nearly 3 billion gallons a year with 93% of the remaining flows treated. We look forward to working with all the partners here today on the remaining challenges.”

Greater Boston, and its three rivers, are already seeing the effects of climate change, especially in the form of heavier downpours, extreme heat, severe storms, and more frequent drought. In 2021, these watersheds saw fifty-two inches of rainfall, twenty-four days above 90°F, and several flash flooding events, all of which influenced water quality grades in the Mystic, Charles, and Neponset Rivers.

The grades, which are based on the percentage of time E. Coli bacterial levels are safe for recreation, precipitation data, and weighted with a three-year average, are influenced by increased precipitation. Additionally, grades for the Charles River account for the presence of cyanobacteria blooms and combined-sewer overflow discharges (CSO), two additional threats to public health, that are each respectively exacerbated by extreme heat and increased rainfall.

In the three highly urbanized watersheds, with over 80% impervious cover in some communities, the scale and consequences of stormwater runoff and sewer overflow due to heavier rainfall and extreme weather are stark, resulting in the degradation of ecosystem health in addition to public health concerns at a time when residents need clean water, resilient parks, and healthy rivers the most.

“For far too long, Boston’s environmental justice communities have been bearing a disproportionate burden of climate change and environmental hazards,” said Reverend Mariama White-Hammond, Chief of Environment, Energy, and Open Space for the City of Boston. “As a Dorchester resident, I dream of the day when residents along the Neponset River Watershed can swim in these waters with joy. I am grateful for Boston’s partnership with the U.S. EPA and our three watershed organizations, and I look forward to our continued collaboration.”

“The Baker-Polito Administration is proud to have invested or committed approximately $56 million to address aging combined sewer overflows infrastructure in the Charles and Mystic River Watersheds, as well as over $8 million in grant funding to all three watersheds to prevent impacts from stormwater,” said Massachusetts Department of Environmental Protection Commissioner Martin Suuberg. “The Report Cards highlight the significant progress we’ve made, and MassDEP remains committed to the ongoing collaboration with our partners at the US EPA, local communities, and watershed advocacy groups to improve the rivers’ water quality on behalf of the public we serve.” 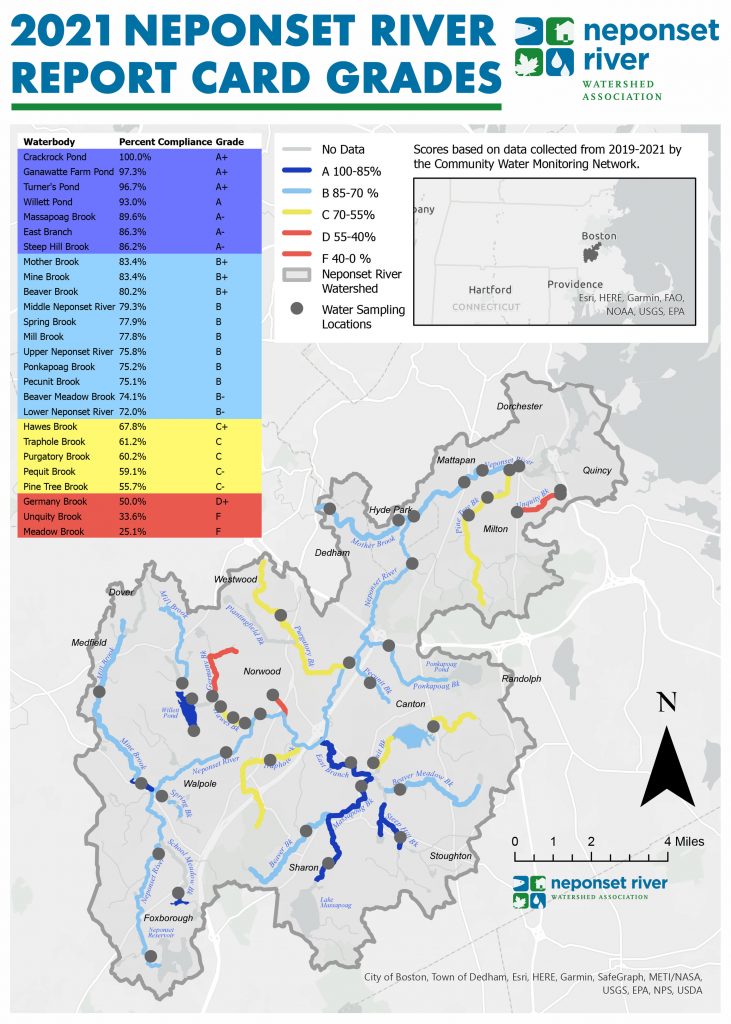 In the Neponset River watershed, most streams and river segments earned grades of “A” or “B”, and all monitored ponds earned “A’s”. Only Unquity Brook, Germany Brook, and Meadow Brook received grades of “D” or “F”. In addition, the mainstem of the Neponset, where most recreation occurs, received grades in the “B” range, indicating that the river met boating standards and often swimming standards as well.

The biggest challenge in the Neponset is polluted stormwater runoff from streets, parking lots, and yards. When it rains, pollutants on our roadways and parking lots– oil, gas, bacteria, pharmaceuticals, and more– are washed directly into our waterways. In wet weather, water quality grades drop 22% on average, nearly two full letter grades, impairing water quality and rendering many areas of the river unsafe for recreation.

“The Neponset River has been completely transformed in the 50 years since the passage of the Clean Water Act, and it’s great to see the explosion in the number of people recreating on and along the river,” said Ian Cooke, Executive Director of the Neponset River Watershed Association. “However, polluted stormwater runoff from streets continues to be a huge problem, and we are working to educate residents and upgrade stormwater infrastructure systems to reduce pollution and prepare for climate change.”

“Knowing what’s ahead in terms of climate change makes it more important than ever to invest in restoring our waterways,” added Sean McCanty, River Restoration Director. “The recent designation of the Lower Neponset River as a Superfund site to clean up contaminated river bottom sediments is a great example of the kinds of steps we need to be taking now to prepare for the future.”