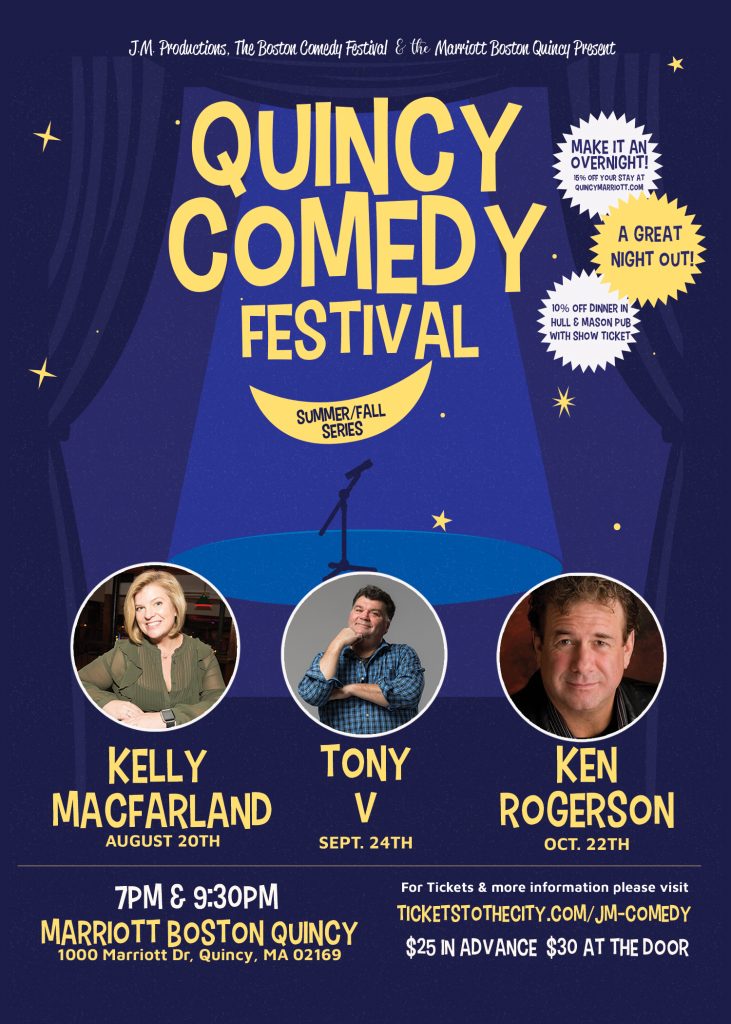 Live comedy shows are back for a second season at the Marriott Boston/Quincy with two performances scheduled for Aug. 20, at 7  and 9:30 p.m. The shows are presented by JM Productions, Jim McCue’s Comedy Club, and the team of the Boston Comedy Festival.

In February of 2022 JM Productions, The Marriott Boston/Quincy partnered with JM Productions & The Boston Comedy Fest to bring an evening of side-splitting comedy to Quincy. The first comedy event cemented the relationship between the three companies. The combined goal is to offer a full complement of national and international comedians at The Marriott for our “Annual Quincy Comedy Fest.”

“To achieve that goal, we strive to build our audiences with smaller more intimate shows throughout the calendar year featuring tops notch New England comedians who will headline the shows,” said John McDonald of JM Productions. “We have decided to offer an early and late show for each date to accommodate our diverse audiences looking for a full evening of entertainment and meal options.

“The Marriott graciously offers discounts for food options pre and post show in their Hull and Mason restaurant as well as discounts to stay overnight if you want to make the experience extra special for you and your group or loved ones! Think ‘girls’ weekend or bachelor’s or bachelorette parties or birthday celebrations.”

As an experienced stand-up comedian, Kelly MacFarland has an extensive and well-rounded resume including comedy clubs, theaters, colleges, festivals, television appearances and entertaining US troops overseas. Kelly was first runner up in the Boston Comedy Festival and voted Best of the Fest at the Aspen Rooftop Comedy Festival. She has performed at the Oddball Comedy Festival, the Comedy Stage at Boston Calling Music Festival, Lucille Ball Comedy Festival – National Comedy Center and has been a featured headliner for the Boston Women in Comedy Festival since inception. Kelly has appeared on Stand Up in Stilettos on the TV Guide Channel, The Today Show, The View, Comedy Central, NBC’s Last Comic Standing and AXS Gotham Comedy LIVE. Kelly won first place in the professional category of the 2016 Ladies of Laughter.

Casey Crawford is an absurdist comedian who tells short jokes loosely based on his dumb life. From growing up poor in rural South Dakota, to struggling in New York City, to his current life in New England and his weird marriage, Crawford narrates his underdog life through one-liners. Crawford is a joke Jedi. His unique perspective put into terse, well-crafted one-liners mixes traditionalism with absurdism and makes him a crowd favorite. Casey was a new face at Montreal’s “Just for Laughs” in 2016. He made his television debut on Jimmy Kimmel Live in 2017 and he regularly performs at the Comedy Studio in Boston MA.

Will Smalley: With more than 10 years behind him in the comedy game, Smalley has made a name for himself by doing more than just your normal stand-up sets. He has launched and taken on projects with his fellow comedy comrades, like Old School Game Show and Surprise Party Comedy at The Wilbur Theatre and has turned them into must-see events, by curating experiences that he hopes audiences will not soon forget. As for his stand-up material, Smalley is way more interested in bringing unique experiences and elements of his comedy to audiences in new ways, rather than add to the plethora of content already out in the ether.

The Brockton native is an established LGBTQ+ voice in the comedy scene. Will is a former finalist in the Boston Comedy Festival and has been featured in the Bridgetown Comedy Festival in Portland, OR in addition to being a mainstay at the major comedy clubs and colleges across the Northeast.