Quincy received a $2 million grant from the state on Friday that will be used to pay for the construction of a second driveway to access the new garage under construction on the former Hancock Lot.

Mayor Thomas Koch accepted the MassWorks grant from Gov. Charlie Baker and Lt. Gov. Karyn Polito during a ceremony held inside the new atrium at 1500 Hancock St. that links Hancock Street to the garage.

The money will enable the city to extend the road now known as Cliveden Street across Hancock Street into the new garage; the mayor has proposed to rename Cliveden Street General Dunford Drive in honor of Joseph Dunford Jr., the former chairman of the Joint Chiefs of Staff.

Koch said the city could acquire three buildings – ­­­1534, 1546 and 1550 Hancock St. – and demolish them to make way for the new roadway as soon as next spring. Construction of the roadway would start next summer.

Funding to purchase and raze those buildings was included in an $80 million district-improvement financing bond approved by the City Council earlier this year. 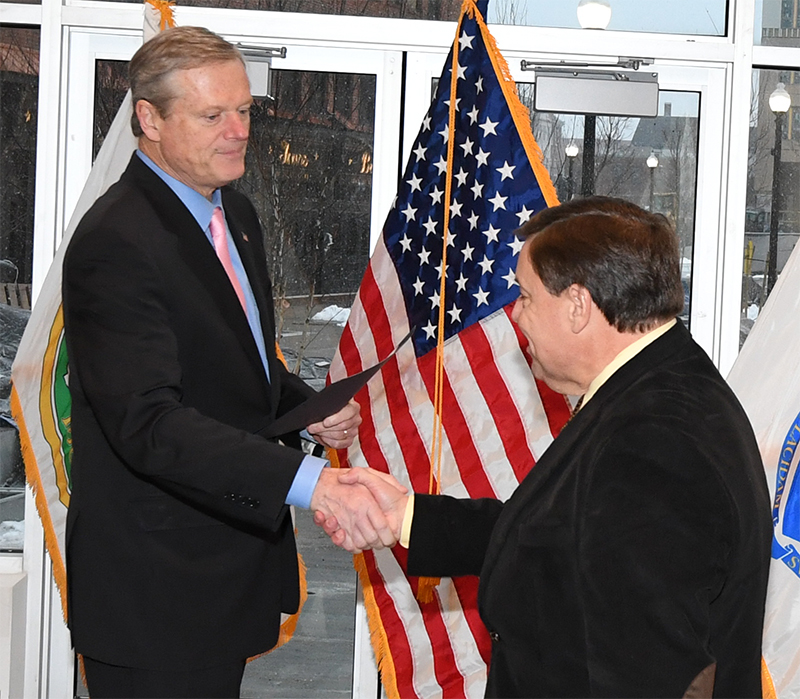 Baker, in awarding the MassWorks grant, said he was happy the state had a chance to partner with Quincy as it redevelops the downtown.

“That reimagination of what you can do with a downtown and think differently, very differently, about how that downtown should be organized and structured for the 21st century…was a big move,” Baker said.

“It was one of many that I think in many ways have opened up significant opportunities across the city and we have been very pleased to be able to partner with the mayor and his team on a number of these initiatives.”

“That gives you a sense of how competitive this program is,” Polito said. “The major criteria is that the grants are shovel-ready…and high-impact. When you think about high-impact and shovel-ready, clearly this is an application that would rise to the top.”

“The power now has been done, so that’s secure. They are just now doing the finishing touches,” the mayor said. “It’s literally any day – probably next week.”

The glass atrium connecting the garage to Hancock Street should also open at that time, Koch said. The atrium was built as part of the Nova Residences project and could one day be used by restaurants that move into the mixed-use building.

“We are envisioning a restaurant or two on this first floor that will spill out into the atrium area,” Koch said. “We think this is going to evolve into some kind of special space, particularly during colder months.”

The state is also picking up the tab to build the $9 million Generals Bridge, which will connect Burgin Parkway to the west end of Cliveden Street.